“I’ve always seemed to fall into “Murphy’s Law” – if anything can go wrong, it will go wrong - which was my initial thought when I was diagnosed with Stage IV HER2+ breast cancer in my early thirties. Luckily through a clinical trial, we’ve found a way to keep my cancer at bay with minimal side effects so that I can continue raising my three boys, working and pursing my artistic passions.” 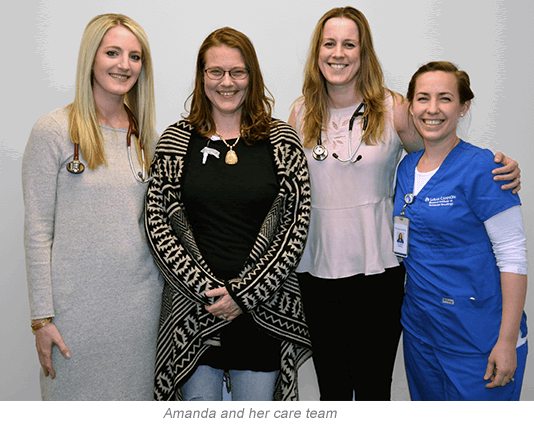 About a year after then 31-year-old Amanda gave birth to her third child, she noticed that her right breast was hard and sometimes hurt to touch, but she attributed the occasional pain to breastfeeding.

“Life was busy at the time, with three kids on top of a big move from Colorado to Tennessee, so I just pushed my worries to the side,” says Amanda.

A few weeks later, a visible lump had formed, so Amanda immediately called her physician who referred her to a specialist. After a mammogram and ultrasound, it appeared that her milk ducts were clogged and she was prescribed antibiotics.

“The medicine only made the pain worse, so my doctors recommended me to have surgery to drain the milk ducts,” says Amanda.

During the operation, her surgeon decided to do a biopsy instead, and within a week, Amanda was diagnosed with Stage IV HER2+ breast cancer.

“When I was first diagnosed, my husband was luckily by my side. The news was shocking and my husband was very concerned. I let him worry enough for the both of us and just decided to throw my life in the hands of my doctors.”

Amanda began chemotherapy in April 2013 and had a double mastectomy in November 2014 before she was sent to Sarah Cannon Research Institute for a clinical trial. The clinical trial she was referred to was geared for women with metastatic cancer to keep the cancer from crossing the brain barrier.

Amanda has responded well to the combination of drugs that she received, which has kept her cancer from growing or spreading. Her hair is growing back, and her side effects are minimal– with some fatigue, nosebleeds and occasional neuropathy.

She enjoys time with her family and has picked back up her love of painting, sketching and drawing.

Dr. Hamilton and her team

“I have three boys – ages 6 to 15 – so they certainly keep me busy. I needed a way to combat my cancer that allowed me to still be their mom. Our family motto has always been “just do whatever it takes and keep moving forward” and we are certainly living by that motto now!”