Brenda, a 60-year-old multiple myeloma survivor from Mt. Juliet, Tenn., is the self-proclaimed “Queen of CAR T-Cell Therapy,” after being declared cancer-free following her participation in a CAR T-Cell clinical trial in June 2016. CAR T-Cell Therapy, a type of Immune Effector Cell Therapy, helps to train a patient’s immune system to recognize and fight cancer.

Under the care of Ian W. Flinn, MD, PhD, at the Sarah Cannon Center for Blood Cancer at TriStar Centennial in Nashville, Tenn., Brenda has been in remission for three years, likely one of the longest remissions from CAR T-Cell Therapy for multiple myeloma on record.

Brenda was diagnosed with multiple myeloma in January 2010 when she experienced kidney failure following a knee replacement. After six years of chemotherapy and a blood and marrow transplant, her condition did not improve.

Despite her rigorous treatment plan, Brenda continued to work as the Director of Civil Rights for the State of Tennessee Department of Intellectual and Developmental Disabilities and researched alternative multiple myeloma treatments in her spare time.

“I read every article I could find on advanced therapies for multiple myeloma. I began reading about CAR T-Cell Therapy in 2015 and asked Dr. Flinn if I was a candidate because I was running out of options. At the time, the therapy was so new and trials were not readily available. So we waited and hoped that the right trial would come along. When Dr. Flinn finally told me I was a CAR T-Cell Therapy trial candidate in early 2016, I began to cry because my prayers had been answered!”

Brenda began her CAR T-Cell Therapy clinical trial in 2016 and received her infusion in June 2016.

“I had waited so long for my CAR T-Cell infusion and honestly, the infusion itself was anticlimactic. It wasn’t painful and only took about 15 minutes, but that infusion absolutely changed my life.”

CAR T-Cell Therapy requires a hospital stay following the infusion for close patient observation but on the 14th day, her labs revealed she was cancer-free. For her, there has not been a sign of cancer since. 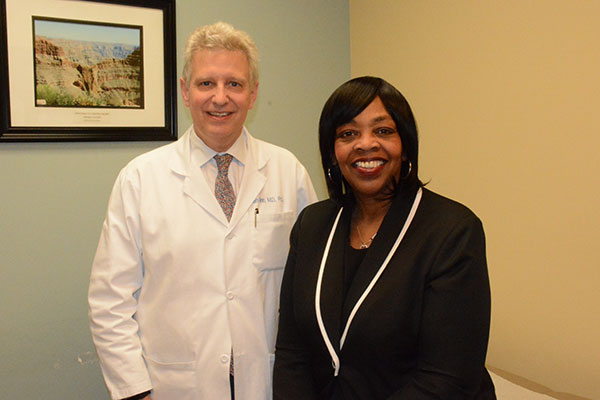 “I fought this cancer so fiercely for six years and then suddenly, CAR T-Cell Therapy began to fight the cancer FOR me. I am now retired and I am truly blessed to be given a second chance at life -– I even went on four cruises last year!”

“Typically, multiple myeloma requires continuous treatment for many years, but CAR T-Cell Therapy is a one-time treatment. This gives patients much more freedom and ability to live their life,” said Jesús Berdeja, MD, the director of myeloma research at Sarah Cannon who works with Dr. Flinn to care for Brenda, and is the primary investigator on her clinical trial.

Brenda comes in for checkups with Drs. Flinn and Berdeja every few months and continues to receive positive reports. Brenda does have neuropathy in her feet and legs but does not let it slow her down as she plans to continue traveling this year.

“I’m so thankful that I have Drs. Flinn and Berdeja helping me fight my cancer. I have a team watching over me and I am so grateful to both of them. CAR T-Cell therapy is a game changer and I believe it will one day be the primary treatment for multiple myeloma.”